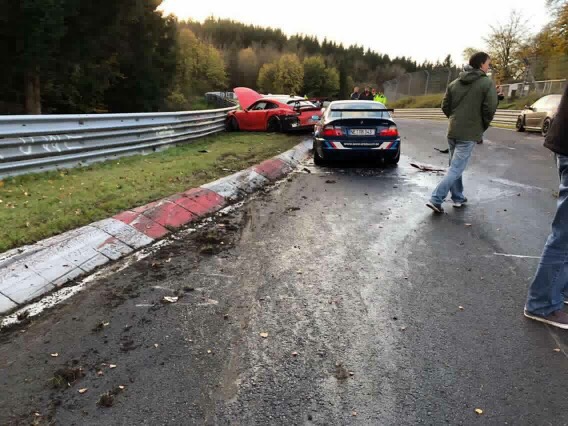 Four days of driving, spread over two circuits, the Nordschleife and the full Nürburgring F1 circuit. And then, just minutes from the last lap of the day…

… a 911 GT3RS pops a coolant hose into Hatzenbach and 13 more cars pile in, unable to stop on the fluid spill. The Polizei report is pretty damning, stating that more crashes were occurring even some time after the first impact. In the end, two drivers were hospitalised, one had to be cut from his Audi and taken by helicopter. Miraculously there were no other serious injuries.

Knowing that a flag marshal had been positioned on this very straight for the previous 3.99 days of Touristenfahrten, I find it hard to understand what wrong.

Drivers involved in the incident report that there was no flag marshal present and no yellow lights shown at T13. Obviously there’s a reaction time involved with any incident. But that’s still disappointing

Several drivers left their cars to try and warn others, only to narrowly avoid being hit themselves. Honestly, I had been anticipating writing a glowing report of an awesome weekend. I saw more marshals than ever before, and the improved signalling in locations like Bergwerk and Kesselchen was a real boost to the safety of the whole weekend.

As reported earlier this week, there was an obvious attempt by the powers-that-be to raise the standards through more marshals, more communications and strict enforcement of the rules. We did nearly 40 laps in the Jaguar Race Taxi, with barely* any dramas. Were you there at the Hatzenbach pile-up? Contact me!