The Nürburgring Nordschleife isn’t the oldest racetrack in the world, but with 90 years of racing under its belt, but I’m going to go on record as saying it’s the best.

Construction started in September 1925, but the epic circuit we all know and love wasn’t completed until late Spring in 1927.

And that first race? 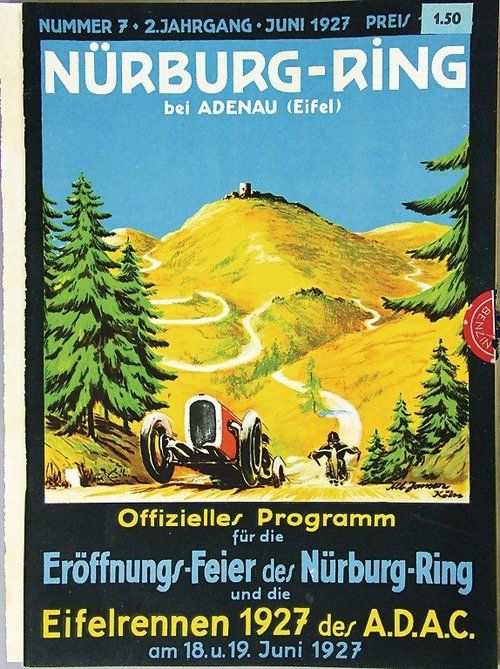 After five dramatic years of running on the public roads, the 6th Eifelrennen was finally held on the newly completed Nürburgring race circuit. In these early days a purpose-built racing circuit really was a novelty.

Imagine a world with just 1% of the motorised traffic we’re now so accustomed too. Even the most utlitarian passenger car would raise eyebrows driving down the street.

Now imagine the impact of seeing a 600hp race-fuelled behemoth belching out 140dB at speeds of 150mph. The modern spectacle of motor racing can’t hold a candle to the thrill, the danger, that the early GP races offered the average spectator.

That’s explains why spectator numbers were so impossibly high. It’s widely accepted that initial attendance figures for the early years at the Nürburgring were tough to calculate. Estimates from the early days range from 100,000 to 300,000 per weekend. That’s at a circuit 50kms from the nearest city, when public transportation was in its infancy, and personal car ownership was rare. The first race cost just two Reichmarks to watch trackside, but 200 marks for a grandstand seat.

And what did that first weekend of racing at the Nürburgring entail? The Eifelrennen offered a full program of 2 and 4 wheeled races. How about a 150km motorcycle race, a 450km sports car race and after all that, public access from 1730 on Sunday for public ‘sight laps’? Sounds like a pretty awesome weekend away in 1927. Some people even started walking from Koblenz two days before the race! (Source: Pro-Steilstrecke)

Caracciola would win the main event in a works Mercedes-Benz S, an early supercharged 7-litre street-legal sports car with somewhere over 300hp. An average lap speed of nearly 100kmh means he was doing the equivalent now of a 12-minute lap – no mean feat for a 1920s street car on a poor surface.

This weekend, in 2017, it’s the Nürburgring Classic. A fantastic festival of classic cars and bikes, racing flat out over the old Nordschleife and modern GP track. I would highly recommend a visit. This Thursday the track is open ALL DAY, and the afternoon is actually the ‘N24’ layout… a 25km lap.

And finally, the official (officially AWESOME) 90 years of Nürburgring video:

Saturday is TF, Sunday is the 2017 Eifelrennen. Are you coming, or what?!

Porsche driver crashes on Alfa oil; gets 25% of the bill

Rad Am Ring cancelled again! What does that mean for TF?